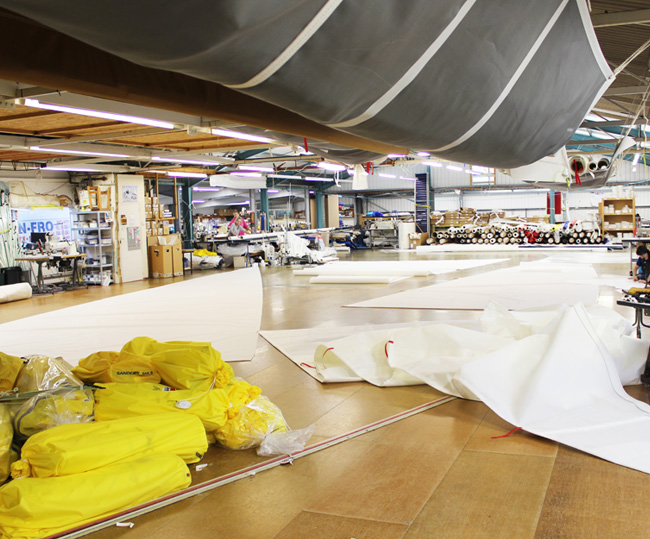 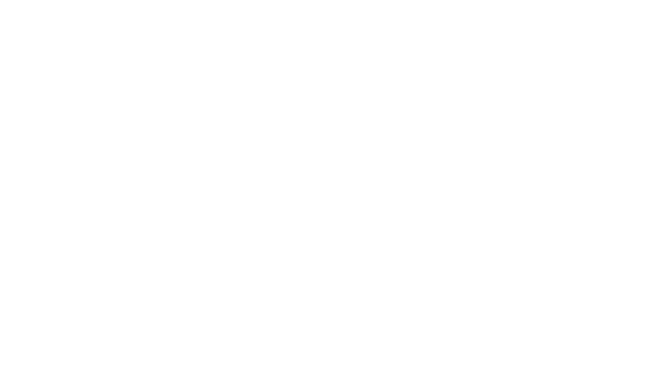 40 Years of Growth and Success 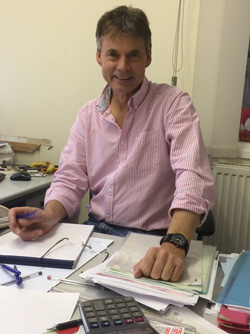 Peter Sanders started Sanders Sails in 1975 when he was 20 years old due to the success of the sails that he had made whilst working for his father “Joe the Tents” company “Lymington Sail & Tent”. For the first 18 months of business Sanders Sails and their three employees shared premises with Lymington Sail & Tent in their small Loft in “Lances Yard” which is where the “Redrow” development is now taking place. Success was immediate for the company when good friend and local boat builder John Claridge won the International Moth European Championships with a special “sleeved luff, fully battened, camber induced mylar mainsail that Peter had designed that was light years ahead of anything else on the water at that time. This early success resulted in orders from all over the world giving Sanders Sails the platform they needed from which they could expand the business. Peter has always been very grateful for the support of John Claridge in the early days and believes that he was pivotal to the success of the business. It is ironic that order number 1 in the Sanders Sails order book was for a Scow Mainsail for the Berthon Boat Company and 40 years later and they are still making Scow sails but the vast majority are for Lymington River Scows built by John Claridge. In 1977 Lymington Sail & Tent and Sanders Sails had to find new premises because Jeremy Rogers had bought “Lances yard” as the site to build his hugely successful range of Contessa Yachts and he needed the Sail Loft for his rigging department. Jeremy Rogers was another important factor in the success of Sanders Sails and forty years on they are still making sails for Jeremy’s own Contessa 26 “Grayling”, as well as for the new Contessas built by “Jeremy Rogers Yachts” and the beautifully refurbished Contessa 32 “Assent” owned by Jeremy’s son Kit who is now the Managing Director of the company that his father formed. Peter is also very grateful to Jeremy’s other son Yacht designer Simon who has championed “Sanders Sails” worldwide recommending them to his many prestigious clients including the owner of the award winning 82ft maxi “Aegir” which remains one of the largest yachts that Sanders has made sails for.

After a difficult search Lymington Sail & Tent and Sanders Sails moved into the site of the old power station owned by the Berthon Boat company which had previously been the premises of the “Lymington Marine Garage”. The car business had long since closed down but the petrol pumps were still there and were still regularly used by Lymington residents. Lymington Sail & Tent utilised the ground floor of these new premises and Sanders Sails utilised the upstairs floor which was specially built with “pits” in the floor to help the “girls” work on the sails. By this time the initial staff of three had expanded to five and Sanders were receiving orders for more and more sails and the size was getting bigger. The biggest of these sails were made for famous Yachtswoman Clare Francis; Sanders had previously made sails for her Nicholson 32 (in which she sailed around Great Britain) and an Ohlson 35 in which she crossed the Atlantic but this latest order was for a Swan 65 in which she would be taking part in the “Whitbread round the world race”. Although the new loft was larger than the previous one it was not big enough to cut out these large sails so Sanders rented the masonic hall, a practice that continued until 1993 when Peter Sanders purchased the Bath road premises of the famous marine electronics firm “Brooks & Gatehouse” which was literally on the other side of the road. By the time Sanders Sails moved into their new premises they had 8 staff.

The “Brooks & Gatehouse” premises were much larger than Sanders required at the time and therefore parts were rented out to other companies including Dunfords, Kelvin Van Hasselt publishing, Tim Drew rigging, David Alan Williams (Naval architect), David King (Graphic designer) and the Anethetists agency. The building that fronted Bath road was converted into a Chandlery by Peter’s father Joe and this became the “shop window” for both Sanders Sails and Lymington Sail & Tent who had moved their Covermaking loft to the Ampress park when the lease with the Berthon Boat Company expired. The first three employees of Sanders Sails were: Peters mother Mary who is now 91 and still works 4 (long) mornings a week; Pat Jeske who is still working for them now although she no longer does the 70 hour weeks she did for the first 39 years and Eric Martch who retired in the late 90’s. Eric was an excellent “handworker” who was able to “hand seam” sails which was a talent necessary when they made Sails for the “Tallships”: “Sir Winston Churchill” and the “Sir Malcolm Miller” which were owned by the Sail Training association. Sanders still make sails for the STA today but they now own 4 x Challenge 72’s therefore the requirement for durability is still the same although the method to achieve it is different. With demand for their Sails increasing Sanders soon had to find extra space and therefore it was not long before they added three extensions to the Main loft which doubled the area and in addition they utilised the buildings that had originally been rented out at the expiration of their leases. 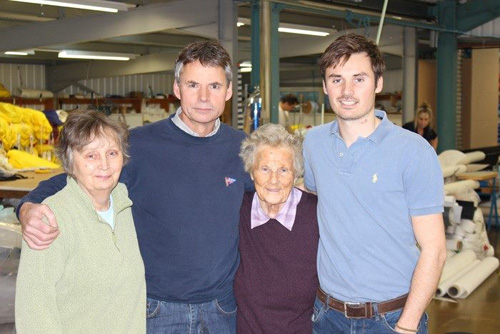 Peter’s sister Kenna joined the firm in 1999 to help Mary in the office but she soon became a pivotal part of the company and is now their office Administrator and a vital member of the team. Sadly “Joe the Tent” died in 2000 and therefore Peter found himself in charge of the “Lymington Sail & Tent company” which was based in the Ampress park. The Chandlery had already been sold to a larger company (and subsequently sold again) and Peter now leases this area to “Force Four” the largest Chandlery chain in the country. Peter has never been keen on Satellite operations and was not happy with the Covermakers being away from the main loft in Bath Road and so in 2001 he extended the Sail loft for a fourth time in order to bring the covermakers “in house”. Next came a hard decision for Peter to make; his father Joe had bought “Lymington Sail & Tent” from Ben Boxall in 1966 and it was very well known in the area; however; it did not make Sails and it did not make Tents so the name had to change so Peter decided on “Sanders Covers & Cushions”. 14 years later this has now been simplified to just “SANDERS” the label used for all the Sails, Covers and Upholstery made by this company. Peter was very lucky as his father had a great team of Covermakers and this side of the company expanded in the same way as the Sail side did making it necessary to move them into a larger unit that had recently been extended (5 th extension). In order to do this another extension had to be added to the Main loft (6 th extension) so that the sail repair department could be relocated.

Sanders Sails was one of the first Sail lofts to utilise computer aided design initially with an Apricot computer and a simple program that Peter wrote that was quickly followed by one of the first Apple computors with a 9” black & White screen that computed offsets that were transferred onto the sail panels via a long table with a very large “T square”. This was a very time consuming process therefore Peter was delighted when a company offered to cut the panels out for him using a “laser cutter”. Sanders Sails utilised this service for several years until they bought their own cutter; the first one from an American company called Carlsen, the second from an Australian company called “Aeronaut” and finally this year they have pushed the boat out and invested £125,000 on a brand new 14.5 metre long custom made Blackman & White cutting table that has a laser gantry one end for cutting Dacron and nylon with a “knife” gantry on the other end for cutting Carbon, Vectran and all laminates. Peter’s son Chris joined the company in 2012 which has extended the family business by another generation as well as adding the computer knowledge required in this technical age. Chris is a great sailor and as well as managing the Cutting Table he is also the in house expert for our “one design sails”. 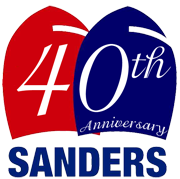 The upholstery side of the company had always been incorporated with the covermakers but due to increased demand in 2015 this side of the company expanded into new premises that we created on the ground floor of “Four Shells” a house on the entrance to our premises from the Queen Catherine road direction. This expansion has increased the workforce to 20 full time plus 5 part time workers. Throughout the last 40 years Sanders has depended on the loyalty and support of many local companies and in addition to those already mentioned it is important to recognise the Berthon Boat company with whom Sanders work very closely as between them they can offer anything and everything a Yacht or Boat owner could ever need.

Sanders Sails are to be found all over the world and at the front of many fleets; they are the recommended sailmaker for the “Ocean Cruising Club” & the “Royal Cruising Club” and in 2015 there sails were the national champions in 8 different classes as well as winners of Folkboat week & the X one design Class in Classic week